The Stone Specialist Magazine has featured an article about the our new 18-month, externally accredited site-based Heritage Building Crafts training programme, which is a one of a kind. In that article, Stone Specialist states that Bakers of Danbury is well known in the heritage sector for the carving and stone cleaning skills of its stonemasons, as well as its wider conservation work.

We are looking for new trainees to join our 18 month Heritage Building Training Programme. During which they will be working for Bakers of Danbury 5 days a week, working closely with their assigned Mentor who will be an experienced and skilled craftsman.

Throughout the training programme, the trainees will be working closely with their Mentor to achieve an NVQ Level 2 in stone masonry preservation skills, together with a programme of accredited heritage building modules which will cover lime plastering, carpentry repairs and other skills necessary to carry out conservation and repair works to churches and ancient monuments.

The Trainees will carry out a variety of conservation and restoration projects on churches, cathedrals and ancient buildings and will cover all learning and assessments onsite. At the end of the training programme they will become qualified and skilled Heritage Building Craftsmen and with the opportunity for subsequent training and internal promotion.

You can read the full article by clicking here. 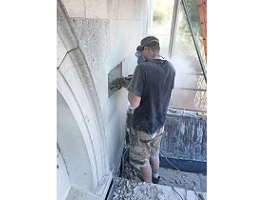 Listed Heritage, the membership journal of the Listed Property Owners’ Club has featured one of Bakers of Danbury’s latest projects in its latest magazine.

The November/ December 2021 issue of the Listed Heritage looks at the interesting conservation project recently carried out by Bakers of Danbury Ltd, which involved stone conservation on a private property in Royston. Works included replacement stone quoins, window jambs, surrounds, lintels and window sills where the existing stone had deteriorated beyond repair.

To ensure the new replacement stone matched the existing, Collins and Curtis Masonry Ltd carefully selected Tottenhoe Clunch directly from the quarry and Bakers’ craftsmen measured and made templates of the individual stones which needed to be replaced.

You can find on page 98 by clicking here.

In time for Remembrance Sunday and Remembrance Day yesterday, Chelmsford City Council commissioned Bakers of Danbury Ltd to carry out a complete restoration to Chelmsford War Memorial, which sits to the front (north) of the Civic Centre. Restoration work started Monday 4th and was completed Thursday 7th November.

We first erected a large scaffold and monarflex sheeting around the memorial to protect the pedestrian footpath and passersby from overspray when cleaning the Portland stone, provide the Stonemasons with access to the full height of the memorial and also to prevent unauthorised access. Our Stonemasons carried out a Doff Clean which uses pressurised steam and also re-pointed the Portland stone cenotaph, square plinth and stepped base.

The Council is fully committed to restoring War Memorials in its care that honour people who have laid down their lives for this country.”

Chelmsford War Memorial was erected 1923, originally dedicated to those men of Chelmsford killed on military service in the First World. It was later dedicated to all those people of Chelmsford, both military personnel and civilians, who died during the Second World War. The north face of the plinth is inscribed with

If you would like to find out more about Chelmsford War Memorial and the men and women the memorial id dedicated to visit www.chelmsfordwarmemorial.co.uk.