Summary: Construction of a new new extension to provide the church with a new meeting area, kitchenette and an accessible WC

Bakers of Danbury are currently building an extension to St Andrews Church in Helions Bumpstead. The extension will provide the parishioners with a new meeting area, kitchenette and an accessible WC. Constructed from a block inner skin with a handmade imperial red brick outer skin, the extension is being built on a 0.6m deep footing. Although due to being on a slope, in areas the footprint of the extension was excavated 1.2m below the existing ground level, which was all carried out with an archaeological watching brief. Once the footprint had been dug, it was covered with a sand intervention layer which helps prevent any further deterioration of the medieval graves which had been partially uncovered. A 0.25m air gap was left between the sand layer and a block and beam floor.

As the extension is partially below ground level a tanking system was installed to the outer brick and inner walls. The bespoke roof was constructed from oak trusses and covered in Cwt-y-Bugail Welsh slate. Water services were run into the church using new MDPE barrier pipe (to prevent contamination) and the power supply was upgraded. Underfloor heating and wall radiators were installed to the extension. The windows to the new extension were constructed of new steel framed casements, within bespoke oak frames produced by our own joinery department. The steel windows have the thinnest sight lines in the industry, thanks in part to the fact they are filled with Krypton, a very dense and highly energy efficient gas, perfect for listed buildings. 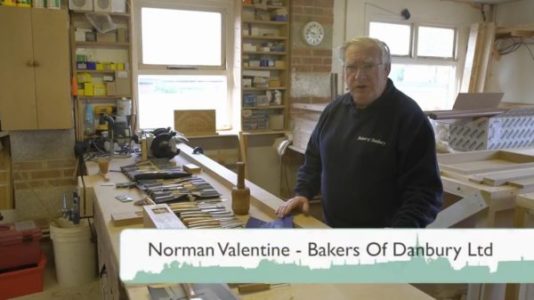 Summary: Bakers of Danbury recently carried our structural repairs, underpinning to the South and North elevations of the Nave to St Marys Church in Mundon, Essex

With the help from a grant, the Friends of Friendless Churches instructed Bakers of Danbury to carry out underpinning to the South and North elevations of the Nave to structurally support the church.

The method of underpinning was determined by the assigned surveyor, and piling drilled at calculated intervals along the interior and exterior of the walls. Sections were dug in intervals under the walls. Reinforcing cages were run through the dug intervals (under the walls), to the inner piles and along the exterior of the walls, interlocking with the drilled piling. The reinforcing cages were covered with cordek heaveguard to the sides and cordek cellcore to the underside. Cordek heaveguard and cellcore are designed to protect ground beams and pile caps from the effects of ground heave. Overtime it disintegrates leaving a void/ air pocket which enables the clay soils space to swell when wet. As soil cannot expand downwards or sideways, the exposed upper surface of the soil will rise up - the void/air pocket will allow this movement without causing heave pressure to the new underpinning structure, and the building it is supporting.

Where internal piling was to take place, Bakers lifted the existing tile pamments from the floor and returned them after works had taken place. Damaged tiles were replaced with new Bulmer handmade clay pamments to match the existing.

A grave slab was revealed when two stone slabs were removed inside the church (south east side) in preparation for drilling a pile. The hole was enlarged to reveal the 15th century grave slab, which would have originally been level with the floor (the floor level has been raised in the 19th century). On the slab indents can be interpreted as a vertical human figure, with a horizontal band below it which would have had an inscription. Pins were visible which were used to fix brasses in place.

Externally a door which had previously been blocked and rendered was rebricked up and a new breathable render applied in addition to areas with damaged render. To the east window Bakers of Danbury replace a tile fillet with a stone sill in Portland limestone.

Bakers removed failing plaster on the ceiling and made repairs before painting it in soft distemper, a breathable paint. The walls were not redecorated as they contain many paintings directly on the walls which include Fragments of medieval murals depicting East Anglian King Edmund (841-869) and a Baroque trompe l’oeil mural over the east window showing tassels and heavy curtains being drawn aside.

After works were completed the rare Georgian box pews were put back in places.

Summary: Tower repairs including repointing to the round tower, re-shingling the spire roof and refurbishing and reinstating the weathervane.

The octagonal spire roof, which is covered with cedar shingles has suffered extensive damage caused by woodpeckers pecking holes in the shingle roof. Bakers will first remove the softwood cedar shingles from the roof structure to allow the architect and structural engineer to review the battens and substructure. There is expected to be a minimal number of structural repairs needed before the spire roof is covered in hand split Oak shakes on pre-treated softwood battens, with new stainless-steel soakers.

The woodpeckers will be deterred from damaging the new spire roof, firstly because by replacing the shingles it will ensure any insects the woodpeckers were drilling for are removed. Secondly, the new oak shakes will be free from all visual traces of former pecking sites which make woodpeckers more likely to return. The new shakes will be constructed from oak which is a hardwood and will have strips of stainless steel behind them, as the sound vibrating off of them will help deter the woodpeckers.

The round tower is of significant importance due to its round shape. It is constructed from coursed flint and ferruginous conglomerate with roman bricks and quoins and houses six bells, just below eves level supported in a steel frame. Bakers of Danbury will be repointing around 60% of the tower as the existing lime mortar pointing (which includes a very coarse aggregate) is failing at parts. The new pointing will also be of a breathable lime mortar with crushed shell.

Bakers of Danbury will also refurbish and reinstate the weathervane. It will be cleaned, a primer applied, and regilded with 24 carat gold leaf. A traditional sand cast lead cap/ weathering will be designed and installed to the weathervane.

Challenge: Access to this part of Westminster Abbey is restricted

Solution: Bakers of Danbury carried out refurbishment and alterations to Westminster Abbey Infirmary providing a galleried area around the room, accessed via a new oak staircase and balustrade manufactured in Bakers specialist joinery workshop. Bakers also manufactured and installed bespoke hand-crafted fitted cupboards and kitchenette which seamlessly filled the space beneath the new gallery level. Masonry and glazing repairs were also carried out.

When working at Westminster Abbey it is important to have continuous liaison with the Clerk of Works to work together and overcome access issues and restrictions. All staff wore a security tab which gave them access to the restricted areas they needed to access. All other areas were strictly prohibited. During special events, such as when HRH Queen Elizabeth visited, the works onsite had to stop. During such times, our Site Manager had to liaise closely with the Clerk of Works and Security.

Summary: Church re-ordering and new mezzanine floor within tower to make it a usable space.

Solution: Bakers carried out a re-order of the church which included a new mezzanine floor with a glass screen entrance within the tower to allow the tower to become a usable space. Externally, stone repair and re-pointing was carried out to the south and partial west elevations. A new lead roof was installed to the tower and the church was decorated throughout, whilst protecting the early 15th century paintings which were later restored.